The Parabolic Microphone:
An ‘eavesdropping’ device used for law enforcement and espionage 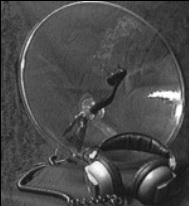 (i) The parabolic microphone is shaped like the parabolic antennae used as television satellite dishes. Instead of collecting radio waves it focuses sound waves into a receiver. Although parabolic microphones can detect and record conversations at up to 250 metres distance, they suffer from poor low-frequency reception. Sound travels at 342 metres per second. To receive hi-fidelity sound, the parabola would need to be 17 metres in diameter. Although parabolic microphones are now approaching obsolescence due to increasingly sophisticated laser devices and remote mobile phone monitoring, they are still popular with nature lovers (Biodish 1000 at $99.95 has 100 metre range).

(ii) Eavesdrop: early 17th century: back-formation from eavesdropper (late Middle English) ‘a person who listens from under the eaves’, from the obsolete noun eavesdrop ‘the ground onto which water drips from the eaves’, probably from Old Norse upsardropi, from ups ‘eaves’ + dropi ‘a drop’.


2. The Paraphernalia of Eavesdropping

(i) Acoustic Kitty: ‘a novel but unsuccessful attempt to implant a clandestine listening device in a cat’s ear’.

(ii) The Insectohopper: ‘a clever but ultimately unsuccessful device modelled on a dragonfly’.

(iii) An electric samovar was presented to the Queen in 1968 by the Soviet aerobatic team. It was suspected that it contained a listening device and was removed from Balmoral Castle following a security sweep.

(iv) A listening device implanted by the FBI in an automobile’s security system.

(v) ‘Remote Call Monitoring will allow you to monitor the target phone of your choice in any place. There is absolutely no restriction on the range available. You will be able to listen to all calls and also just to listen in, i.e. listen to the surroundings of the target phone, wherever it may be.’


3. US Government Sponsorship of Surveillance Technology

(i) ‘On 11 July 1941 President Franklin D. Roosevelt designated William J Donovan as Coordinator of Information, with “authority to collect and analyse all information and data on a worldwide basis that may bear on national security”. To accomplish this mission, the COI was authorised to “employ necessary personnel and provide services” for what became the first US government organisation with a worldwide intelligence mission.’

(ii) ‘the Office of Technical Services prided itself in developing a microphone in a bullet which could be fired into a tree and still function.’

‘innovative engineering, best illustrated by the CIA’s efforts to find a reliable method for drilling through walls for the insertion of listening devices. A solution to the problem of determining how far to drill through a party wall, and finish the final access with a tiny pinhole barely a millimetre wide, was achieved using backscatter technology, which counts gamma rays and gives a good indication of when a technician has reached the wallpaper or plaster surface in the target’s room.’

‘the use of steganography to hide intelligence in digital images’.

(i) The fourth amendment to the US Constitution protects ‘the right of the people to be secure in their persons, houses, papers, and effects, against unreasonable searches and seizures’ […] colonists were familiar with unbridled methods of law enforcement. British officials conducted warrantless searches and seizures, and made arrests based on mere suspicion’.

(ii) ‘In Katz (1967), the police attached a listening device to the outside of a public telephone booth where the defendant was later recorded making inculpatory statements. The Court declared this type of warrantless surveillance unconstitutional. The Court emphasised that the Fourth Amendment protects persons, not places, and held that the amendment’s protections extend to any place where and individual maintains a reasonable expectation of privacy’.

(iii) Silverman vs. United States (1961): ‘At the trial in a federal district court in which petitioners were convicted of gambling offences, there was admitted in evidence testimony of police officers describing incriminating conversations engaged in by petitioners at their alleged gambling establishment, which the officers had overheard by means of an electronic listening device pushed through the party wall of an adjoining house until it touched heating ducts in the house occupied by petitioners. Held: Such testimony should not have been admitted in evidence, and the convictions must be set aside’.

-‘Privacy is closely connected to notions of inherent human dignity. The intimacies of private life go to the very core of what it means to be human. Privacy is therefore worthwhile in itself in protecting human personality or the inherent dignity of the person’.

-‘our core recommendation is for the enactment of a civil tort directed against acts of privacy intrusive surveillance in circumstances where a “reasonable expectation” of privacy exists’.

-‘with respect to criminal law we recommend that sanctions should be confined to the most outrageous forms of intrusion in circumstances where the expectation of privacy is at its highest (in a dwelling) or where the activity in question is inherently private (e.g. private conversations)’.

-‘the gravity of surveillance as a threat to personal privacy in today’s world can be understood from considering the following list:

-parabolic microphones with ranges extending to more than 250 metres,

-miniature tape recorders which can be concealed inside, for example, cigarette packets,

-sub-miniature transmitters, smaller than sugar cubes, which can record conversations from a distance of 10 metres and transmit them at high quality up to 150 metres,

-listening devices which through the use of laser beams can monitor and record conversations from positions outside the room in which they are occurring,

-electronic stethoscopes which, by picking up mechanical vibrations and amplifying them up to 10,000
fold, enable conversations to be monitored through windows, doors and walls.’


5. Private Sector Use of Listening Devices

‘Electronic surveillance is most common in two areas of the private sector: employment and domestic relations. […] Sixty-eight percent of all reported wiretapping involves divorce cases and custody battles. Spouses, attempting to obtain embarrassing or discrediting information against each other, have planted video and listening devices throughout the marital home’.

‘The potential of a technology for harm needs to be kept distinct from its realisation. Just because something negative could happen, does not mean that it must happen. In short little consideration is given to how the dystopia will actually be produced or to factors working against it such as practicality, cost, laws and fear of lawsuits, organisational policies, morality, doubts about effectiveness or the ability to control the technology, or concern with public opinion’.


Return to Autopsies of Surveillance