The ‘Japanned’ Coal-Scuttle
Symbols of Warmth and Light in A Christmas Carol. 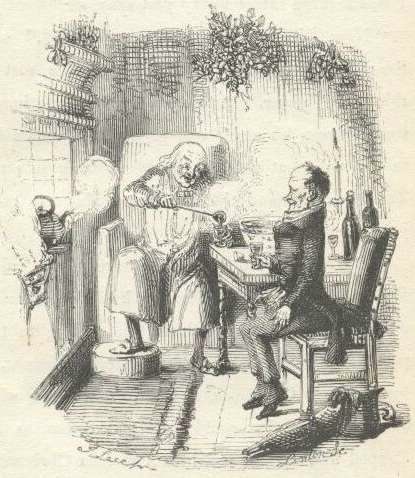 ‘What do literary maps do? First they are a good way to prepare a text for analysis. You choose a unit- walks, lawsuits, luxury goods […] find its occurrences, place them in space […] you reduce the text to a few elements, and abstract them from the narrative flow.’  [1]

The chosen ‘unit’ for this brief study is the mid-Victorian japanned coal-scuttle.

‘External heat and cold had little influence on Scrooge. No warmth could warm, nor wintry weather chill him. No wind that blew was bitterer than he’ (Charles Dickens, A Christmas Carol, 1971 [1843]: 46).

‘Charles Dickens wept and laughed and wept again, and excited himself in a most extraordinary manner in the composition.’ [2]

‘Scrooge had a very small fire, but the clerk’s fire was so very much smaller that it looked like one coal. But he couldn’t replenish it, for Scrooge kept the coal-box in his own room; and so surely as the clerk came in with the shovel, the master predicted that it would be necessary for them to part’ (ibid: 47). 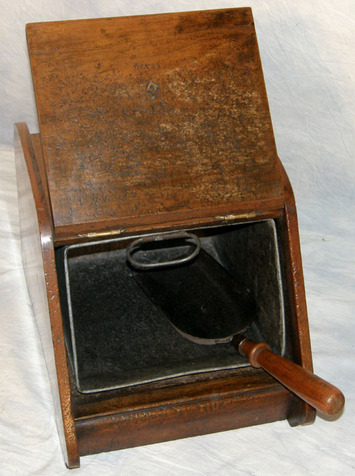 More than just a symbol of Scrooge’s miserly unfeeling nature, the coal-box here is pivotal to the relationship between Scrooge and his clerk. Scrooge’s fire, although small, is larger than Bob Cratchit’s. Cratchit cannot access the coal-box without entering Scrooge’s room. It is a symbol of the power held by Victorian master over servant and Dickens juxtaposes ‘the master’ with ‘the clerk’ to emphasise this. The threat of instant dismissal is held over Cratchit. No provision was made in 1840s Employment legislation for unfair dismissal.

‘The clerk in the tank involuntarily applauded: becoming immediately sensible of the impropriety, he poked the fire, and extinguished the last frail spark forever’ (ibid: 49).

‘some labourers were repairing the gas pipes, and had lighted a great fire in a brazier, round which a party of ragged men and boys were gathered: warming their hands and winking their eyes before the blaze in rapture […] Scrooge walked out with a growl’ (ibid: 52).

‘And the servants and officers stood there, who had made a fire of coals; for it was cold; and they warmed themselves: and Peter stood with them, and warmed himself […] Peter then denied again; and immediately the cock crew’ (John. 18:18).

A London street scene with resonances in the final chapter of John’s gospel. Scrooge has denied Christmas.
Scrooge at Home with the Spirits

‘He put on his dressing gown and slippers, and his night cap, and sat down before the fire to take his gruel. It was a very low fire indeed, nothing on such a bitter night. He was obliged to sit close to it, and brood over it, before he could extract the least sensation of warmth from such a handful of fuel’ (ibid: 56).

Unlike the blazing fire in the street scene, the fire in Scrooge’s bedroom is ‘a very low fire’, as with the ‘very small fire’ in his business office.

The First of the Three Spirits: ‘its light was burning high and bright […] he seized the extinguisher-cap and by a sudden action pressed it down upon its head’ (ibid: 84).

Scrooge can no longer bear the vision of the domestic bliss of his childhood sweetheart and, by extinguishing the light shed by the spirit, also extinguishes unwelcome reproaches of opportunities missed: ‘Remove me […] I cannot bear it!’ (ibid: 83). As with Bob Cratchit’s fire, hope of light and warmth is ‘extinguished’.

The Second of the Three Spirits: ‘a Jolly Giant, glorious to see; who bore a glowing torch, in shape not unlike Plenty’s Horn’ (ibid: 86).

‘The sight of these poor revellers appeared to interest the Spirit very much […] he sprinkled incense on their dinners from his torch’ (ibid: 91).

Once again, light and warmth symbolise ‘plenty’, as a vivid counterpoint to the chilly gloom of Scrooge’s domestic arrangements.


Scenes of Domestic Warmth and Light

‘[Peter Cratchit] blew the fire, until the slow potatoes, bubbling up, knocked loudly at the saucepan lid’ (ibid: 93).

‘[Tiny Tim] escorted by his brother and sister to his stool before the fire’ (ibid: 95).

‘it was […] snowing pretty heavily; and as Scrooge and the Spirit went along the streets, the brightness of the roaring fires in kitchens, parlours and all sorts of rooms, was wonderful’ (ibid: 99).

The Lighthouse: ‘even here, two men who watched the light had made a fire, that through the loophole in the thick stone wall shed out a ray of brightness on the awful sea’ (ibid: 101). [3]

Scrooge’s nephew and family: ‘they had just had dinner and, with dessert upon the table, were clustered round the fire, by lamplight’ (ibid: 103).

The rag dealer: ‘sitting in among the wares he dealt in, by a charcoal stove, made of old bricks, was a grey-haired rascal, nearly seventy years of age’ (ibid: 114).

Whether the domestic circumstances are reduced or comfortable, a fire casts light and warmth on the proceedings.

“Bob! Make up the fires, and buy another coal-scuttle before you dot another i, Bob Cratchit!” (ibid: 133).


Coal-Scuttles and the ‘Japanning’ industry of Wolverhampton 1818-1866

(a) japan: ‘a hard, dark, enamel like varnish containing asphalt, used to give a black gloss to metal objects’. [4]

(c) Richly decorated japanned ware was to be seen in every middle-class home […] but, from the mid-1800s, this began to change’ (ibid). 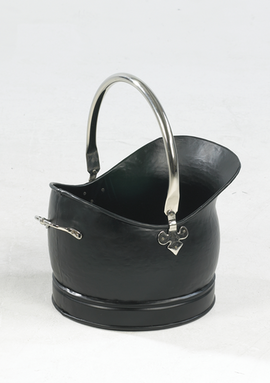 Dickens has ‘topped and tailed’ his Christmas story with a coal-scuttle. In the opening chapter, the coal-box is inaccessible to the clerk. In the final scene, a new coal-scuttle is provided by his newly converted master, symbolising Scrooge’s changed way of life. Nonetheless, perhaps with a touch of irony, a continuing meticulous work-regime is hinted at in the ‘dotting’ of ‘i’s. 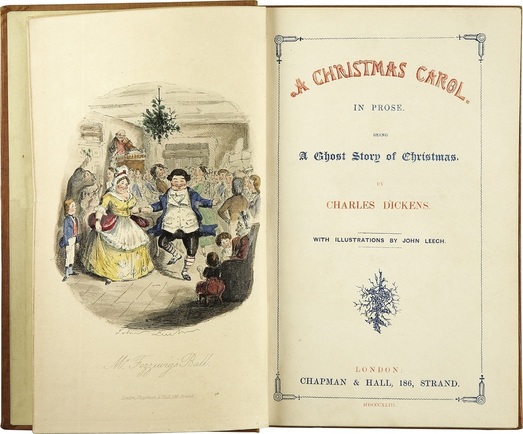 [3] cf. ‘Let your light so shine before men, that they may see your good works, and glorify your Father which is in heaven’ (Matthew 5:16).

Back to The Afterlife of Dickens Objects