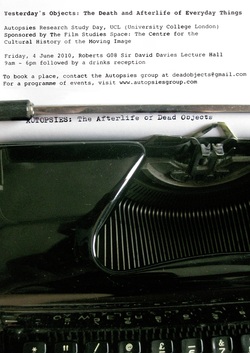 Steph Fuller was an Autopsies Reading Group Participant in 2009-10 and has joined the Autopsies Group as a Member in June 2010. She will be undertaking a PhD at the University of East Anglia in October this year entitled "Motion Pictures and Mobilities: Crossing the US-Mexico Border in Film." She received an MA with distinction in Film Studies at UCL with a dissertation called "Cartographic Cinema: More than just Maps." She studied for her BA at Cardiff University in English Literature and Cultural Criticism.