The Autopsies Group offers a tribute to the late Eric Rohmer through a collection of objects, now obsolete or nearly so, which his films help us to remember. While we might not in principle embrace "auteurism" as a theoretical or conceptual model, remembering Rohmer's career by means of the spaces and objects around which his films circulated gives us a sense of the era that he captured. Our Rohmer museum reminds us of the fantasies of the modern that the so-called "New Wave" fueled. 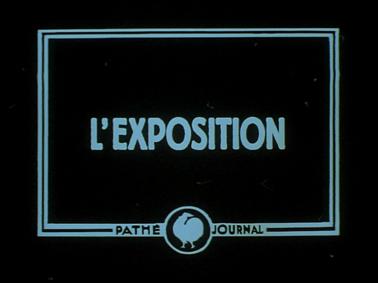 Triple agent (2003) is set between 1936 and 1943. This past has two media in the film: document and object. Chief among documents are the eight passages of newsreel (all authentic) that punctuate the film, fixing the date and situating the story in history. Objects can be seen in these newsreels, including this mysterious assortment of apparatus (and pictures of apparatus) from the Nazi Pavilion at the 1937 Exposition: 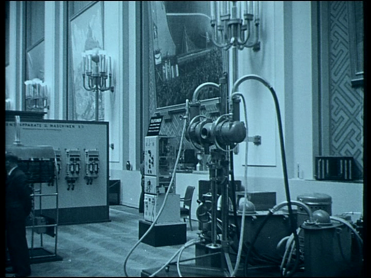 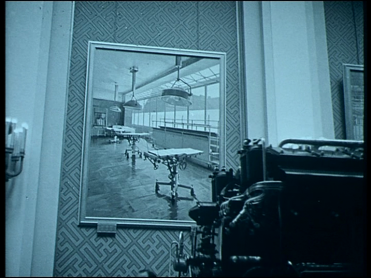 Most of the objects documented by the newsreels are more everyday: buildings, cars, clothes, newspapers, recording apparatus (cameras and microphones), weapons. Such objects, themselves mostly long gone, have their ghosts in the present, the props accumulated to give period authenticity to the fiction. These are of two kinds: objects that have survived from then till now, and objects that have been reconstructed, either on the basis of exact reproduction (newspapers) or on the basis of approximate correspondence to a style (clothing, curtains, wallpaper). 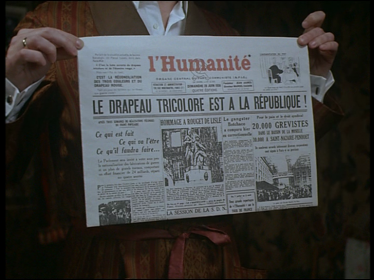 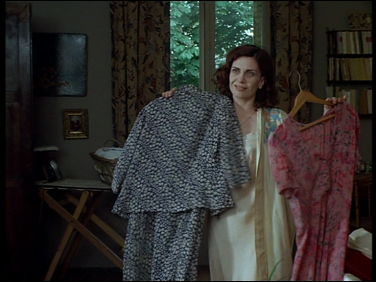 Chief among survivors are motor cars: these vintage specimens have been lovingly preserved by amateur enthusiasts or professional companies, to be loaned out as ‘véhicules de jeu’, performing vehicles such as these (a Chenard et Walcker and a Citroën cabriolet): 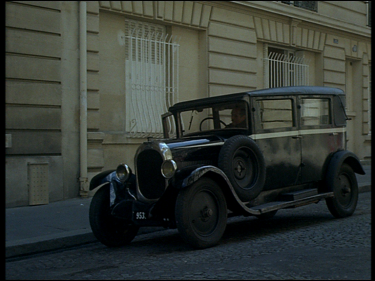 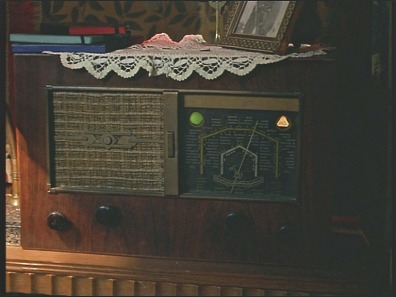 The other artefacts of this order habitually displayed by period cinema (telephones, tableware, furniture, books) will have been preserved, likewise, by professional companies, or else are gathered on the nonce from the puces, from antiquaires, or from private collections.


Triple agent plays on the gap between past and present in at least three ways. Firstly, as a fact/fiction, public/private opposition, opening with newsreel about a public event (the May 1936 elections in France), and passing then to the mise-en-scène of a private interior. This space is littered with period and anterior artefacts: wallpaper, books, paintings, photographs, bric-à-brac, finishing with a close up of the wireless set (which I have not yet identified) that has been filling the room with the election results, bringing together public and private, fact and fiction.
Secondly, as a contrast between lovingly preserved objects in the present and their less fortunate contemporaries. The incidental typewriter in an office (a German-made Triumph), here part of the fiction’s mise-en-scène, has a counterpart in a pathos-laden object (a Royal 10) documented by newsreel: 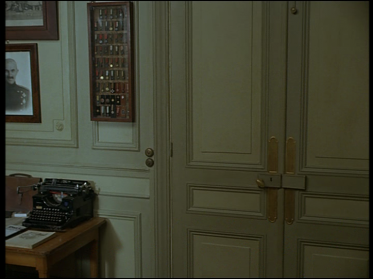 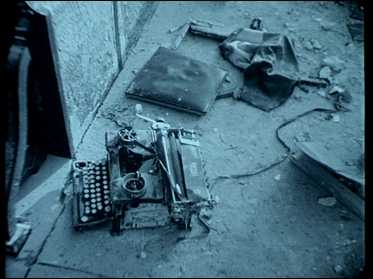 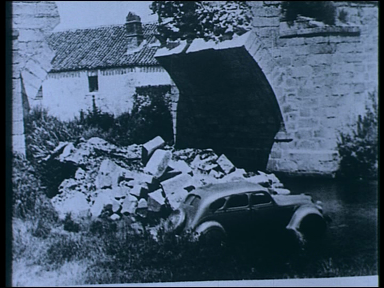 As do the fiction’s pristine vehicles in the newsreel’s document of a car abandoned in the ruins of war:
The apartment building where the protagonists live (rue Georges de Porto Riche, built 1932), an object from the past that still serves today, has its counterpart in apartment buildings destroyed by bombing: 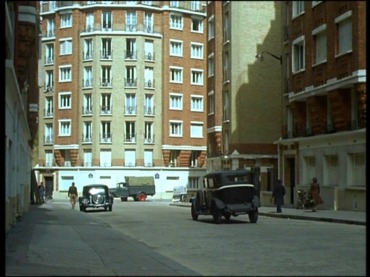 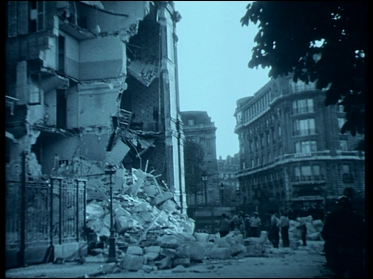 The third way in which the film plays on the gap between past and present is by inventing the past. This is again a fact/fiction opposition, the same one that opposes Rohmer’s film and the dvd’s accompanying ‘featurette’ on the true story behind the one Rohmer tells, but the opposition is most clearly manifest in the film’s objects. That the period clothing worn by the actors will have been confected for the film is unremarkable, but when the film brings us to a place of such confection, a dressmaker’s, the film is reflecting upon its procedures – the sign of which is, in the middle of the sequence, an iris-in and then out. 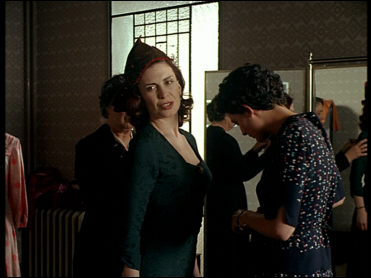 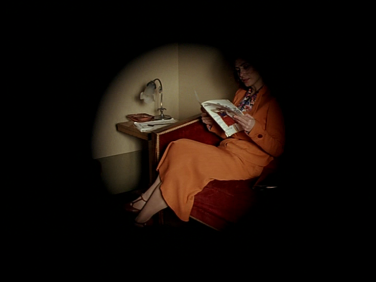 More overt than the clothing are the invented paintings. The female protagonist is a painter, and we see a dozen or so of her paintings, made for the film in an authentic social realist style (attributed in the credits to Pascale Boillot and Charlotte Very). They are set against genuine 1930s art in two ways. Firstly, in the fiction, where an acquaintance has etchings by Gontcharova and Picasso (these may be actual etchings or reproductions, film cannot differentiate). Secondly, in the embedded newsreels, where a definitely authentic Picasso (Guernica) is shown on display at the 1937 Exposition. Guernica in this framing is an abyssal comment on the newsreels themselves as historical document, and as framed by Triple agent comments on the historicity of Rohmer’s film. The invented paintings are reflexively abyssal in this familiar way, embedded instances of a medium that represents differently the same kind of things as the framing medium. Here are gardening tools in a painting, and in the film itself: 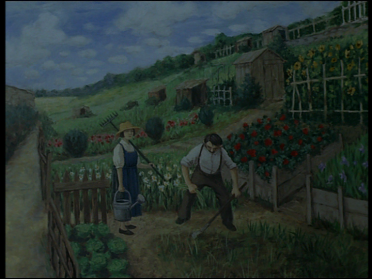 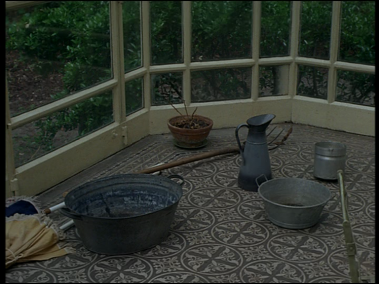 And here are other painted objects that figure also in the mise-en-scène: 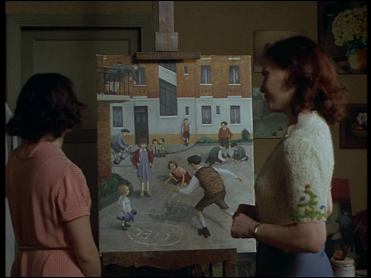 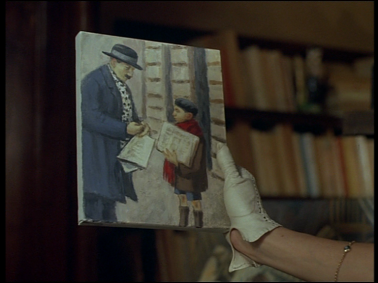 Newspapers appear in three other ways in Triple agent: in the newsreels, as real objects long gone; as reconstructed objects, where any surviving original would not look new enough for the fiction’s purposes; as invented objects, confected to conform to the fiction’s needs: 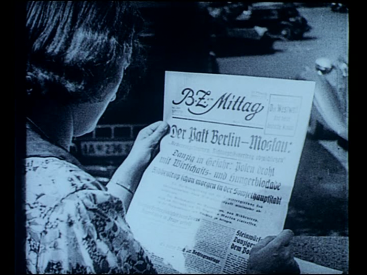 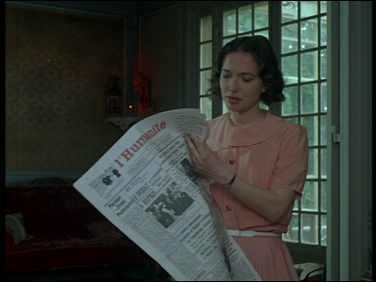 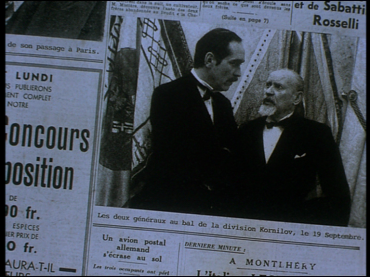 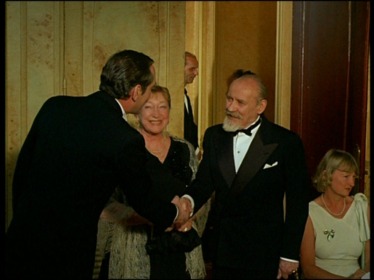 Reflexively, again, the framing of these familiar instruments of communication by Triple agent comments on how Rohmer’s film represents things differently, and communicates by other means.

In its epilogue, Triple agent closes on the discovery of less familiar objects from the past, the surveillance apparatus that facilitated the protagonist’s escape after his triple agency was exposed. A map shows the disposition of microphones in the offices that were spied upon. The explanation of how private conversations were discovered by the apparatus ties up loose ends in the story, and brings to a close the abyssal motif that radio, filmmaking, photography, newsprint, art and couture have sustained through the film: a machine that makes the private public is much like the film’s story-telling.

Beyond such reflexivity, Triple agent is interested in its objects for themselves, taking pleasure in their recondite forms, but the listening apparatus takes that interest beyond nostalgia for the lost forms of familiar things. I have no doubt that this looks like 1930s surveillance equipment, and am happy to believe it is authentic, borrowed from one of the more recherché collections of the past’s paraphernalia. But the past embodied in these objects is of a different kind, one whose present form is not our own immediate experience of telephones, cars and clothes, but only the mediated experience of espionage that we have from the cinema (The Conversation) or television (The Wire). 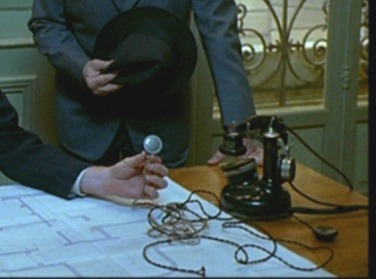 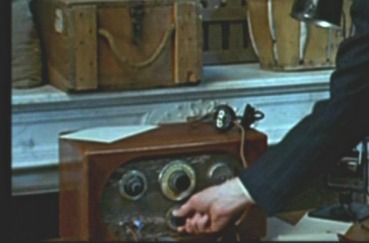 The first object to figure in the story of Triple agent was the domestic wireless set. It is apt that the story closes with a complex disposition of exotic objects, fully wired.

(My thanks to Richard Polt and Alain Fontaine for the identification of objects for this piece.)