Members of the Autopsies Research Group participated in the UCL Graduate School's 'Research Images as Art / Art as Research' exhibition, held in the North Cloisters, UCL, in January 2011. Here are their contributions to the exhibition. A full gallery of images from the event can be viewed here. 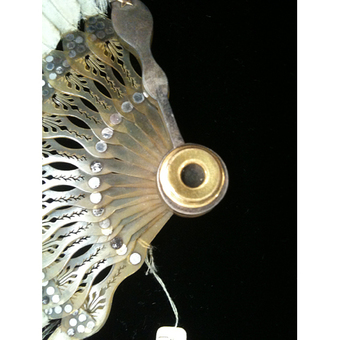 The Autopsies Research Project in the UCL Film Studies Space explores the afterlife of objects of modernity. This optical fan, dating from around 1800, evokes an extraordinary conjunction of modern optics and transforming gender politics in the period just after the French Revolution. Women circulated in public in hordes but could make the pretence of hiding politely behind a fan like this one in the theatre and promenades. The little spyglass at the centre of the fan makes it clear these women were in public as much to be spectators as to be spectacles. This photograph, taken in the storage wing of the Musée des Arts Décoratifs in Paris, shows the fan in its protective box surrounded by black velvet with a label that reminded me of a toe tag in a morgue. I felt lucky to get to see the fan, even if I didn't get to look through its little lorgnette or spyglass to see what it might have felt like to spy with the eyes of its original owner. 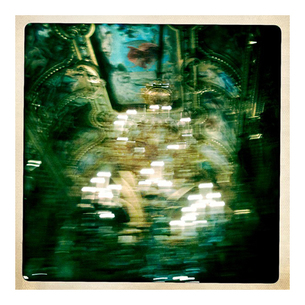 The Autopsies Research Project in the UCL Film Studies Space explores the afterlife of objects of modernity. This photograph, taken with the Hipstamatic application on an Iphone, in the Grand Foyer of the Palais Garnier Opera of Paris on Halloween evening, represents a strange mixture of our concerns. I visited the opera for research on Gaston Leroux's Phantom of the Opera and the continuing afterlife of that 1909 novel in the cinema (especially the technicolor silent masterpiece from Universal starring Lon Chaney in 1925) and the theatre (the longest-running musical of London and Broadway). Among the photographs I took to think about the spaces in which Leroux imagined a broken man haunting the opera built between 1861-1875 with the most modern architectural methods known and combining a strange set of classical, baroque, and orientalist fantasies, was this one, taken with the Hipstamatic application. The Hipstamatic camera was a nearly unknown invention by two young men, Bruce and Winston Dorbowski, who died tragically in 1984 after completing just under 200 copies of their invention, a camera designed to be cheap enough for anyone to enjoy. Iphone developers contacted their relatives and have made the Hipstamatic live again through our phones, giving this invention an afterlife that the two inventors could never have dreamt. My photograph here is a tribute to those two young dreamers whose invention helps us see the world in ghostly and yet magical ways. The Phantom of the Opera surely would have liked it.

Tango Dancers on Halloween at the Palais Garnier Opera

The Autopsies Research Project in the UCL Film Studies Space explores the afterlife of spaces as well as objects of modernity. I recently visited the Palais Garnier Opera of Paris for research on Gaston Leroux's Phantom of the Opera. Some of the other photographs from that visit are on the Autopsies twitterfeed.  At dusk on Halloween evening, as I leaned out over the balcony off the ice cream room ("Le Glacier"), I discovered a ballroom group dancing that most modern of all Parisian dances, the Tango, on the steps of the opera. I snapped this photo with my Iphone, a kind of tribute to the juxtapositions of modernity in which I found myself on all Hallow's Eve, tracking a live ghost who existed only in novelistic and film fantasy, but finding in its place, those who refabricate modernity's body in their tribute to the Tangomania of 1911-1914. For more info about the Paris tango and its unique moment, Matt Matuda's Memory of the Modern, has a great chapter. For my part, I came away from the Opera thinking it was perhaps time I learned to dance in high heels.

Autopsy of a Hair Dryer 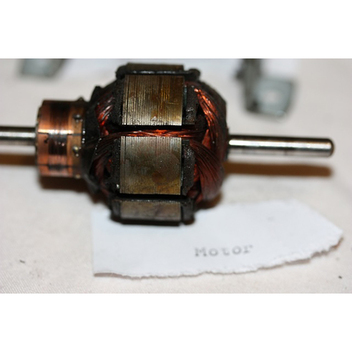 This image shows the motor from a 1936 Ormond hair dryer. The hair dryer was broken down and stripped apart to expose all the individual parts that made it function. The parts were laid out, labelled, and photographed and "autopsied" as if by a mortician. This image comes from a series of ninety that recorded the death of the hair dryer, and in doing so, created for it an â€˜afterlife. The research that led to this series of images was carried out as part of the Autopsies Research Group. The group is interested in the obsolescence of objects and technologies. As part of the project "Cinematic Memory, Consumer Culture, and Everyday Life," the group explore the ways photography and moving images can remember and reflect upon these dead things, creating an "afterlife" for them. The hair dryer used for this "autopsy" was a 1936 design by the Ormond Electrical Engineering Company, who also manufactured radios. The hair dryer was produced in Clerkenwell, London and the design survived until 1962. The hair dryer could be purchased in cream or brown imitation walnut (made from urea/phenol plastics) and came housed in a Bakelite vanity case with a comb and mirror. The element would be formed from chromium and nickel wire, wrapped around a mika or asbestos board (the white board to the left of the image). It is not the hair dryer that is dead but the materials which form the components inside it. An appliance which may blow chrysotile or white asbestos particles into the air is a dangerous and potentially deadly object. 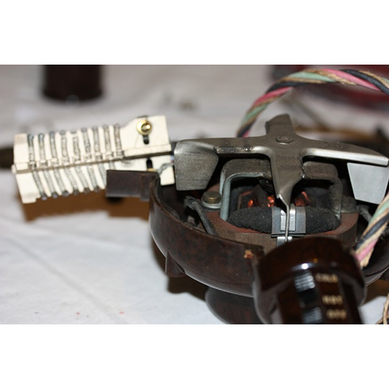 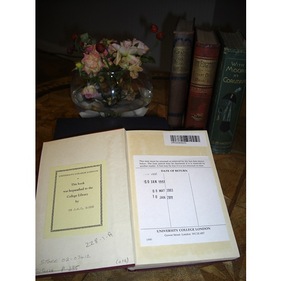 The Autopsies Reading Group at UCL engages with dead objects. My image asks the question as to whether a book hidden in a university archive for over eighty years qualifies as 'dead'. The book in question is Charles Kingsley's 'The Heroes' from 1855 which he wrote to bring the stories of Greek mythology to his own and other children.It is an engrossing and exciting work which tells us much, not only about mythology, but about prevailing attitudes at the time it was written. Why is no one at the world's fourth most important university interested in reading it? You will see from the library slip that it must be returned to 'stores' by January 11th. It was last borrowed eight years ago and previously six years before that. Are the greatest stories ever told now irrelevant to learning at UCL? Or are they perhaps being read at UCL in the original Greek? Who was JWC Hands who donated the book to the library? What might his opinion be on the infrequent use of what he conceived to be a valuable contribution to knowledge at UCL?

To Have and to Hold 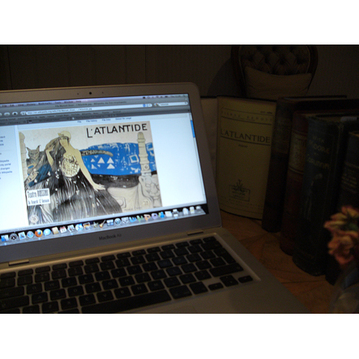 This photo, reflecting some of the preoccupations of the Autopsies Group, explores the relationship between the written word and the digital image. The yellow book on the right of the screen is a first edition (1920) of Pierre Benoit's best selling novel 'L'Atlantide' which recounts how two French soldiers become lost in the Sahara and how they come upon the hidden kingdom of Atlantis. The book has been in the archives of UCL since it was presented to the University in 1938 by the 'French Government', as attested by a plate in the front cover. It would appear that I am the first borrower. It is an enthralling object to handle and to read. It has a faded leather-cloth cover embossed in gold, yellowing pages and the indefinable musty smell of scholarship and nostalgia about it. The image on the 'laptop' screen is a poster from Jacques Feyder's 1921 film of L'Atlantide. The image says nothing about the powerful themes of loyalty, comradeship, betrayal and manly heroism which are central to the narrative. I have on my desk a DVD copy of Feyder's film, re-mastered and digitalised. I have not watched it. I may never watch it. I have to return the book to the 'stores' in the UCL library on 10th January 2011. I will be very sad to hand it back. I hope that someone else will borrow it within the next seventy years and that it will give them the great pleasure it has given me. 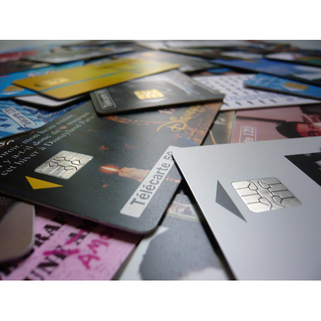 This collection of French Télécartes, produced by France Télécom, dates back to the mid-1990s before the introduction of the mobile phone. In the 1990s, the huge amount of phonecards produced meant that many colourful designs were created specifically for them. In France, series were produced with such themes as the different figures of the history of the telephone, or the 50th anniversary of the 1944 Liberation of France. These themed series promoted, and encouraged, the idea that phonecards were collectable items, just like stamps. France Télécom also opened the little space available on the cards for advertising. The lifespan of a phonecard was always very limited, but now with the pending death of phone booths, the phonecard is now doomed to vanish completely. 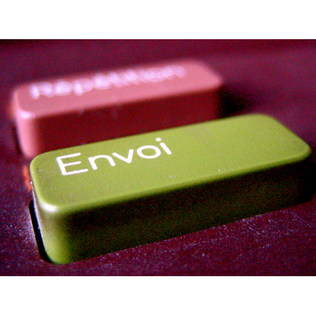 In June 2010, the Autopsies Research Group hosted an interdisciplinary study day at UCL entitled 'Yesterday's Objects: The Death and Afterlife of Everyday Things.' The event, which attracted contributions from cultural historians and film theorists from across the UK and abroad, raised questions about consumer culture, social change and the objects we associate with 'modernity.' The study day helped the Autopsies Group to develop our ongoing project about how everyday objects die. This photograph illustrated my contribution to the study day. It shows a detail of my chosen 'dead object,' the Minitel. From the early 1980s, the Minitel gave access to a text-based information service to millions of people in France via conventional telephone lines. Commonly described as a predecessor of the internet, the Minitel provided an electronic telephone directory and served as a platform for other services such as train times, horse racing results and sex chat lines. Minitel began to decline only recently, following improvements in domestic internet provision in France. While loyal Minitel users remain, the future is uncertain for the eight million Minitel terminals that are now gathering dust in homes across France. 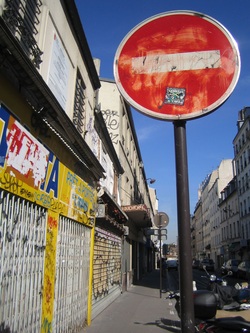 This photograph shows a row of empty shops and abandoned apartment buildings awaiting demolition in the 10th arrondissement of Paris. The developers describe the buildings proposed for demolition as 'mediocre' in quality. Some of the buildings have been condemned dangerous. Cracks are visible in floorboards, and the fragile wooden frames are full of woodworm. The developers propose to demolish the existing buildings and build a new structure to provide 80 flats. Some conservationists oppose the demolition. They believe the buildings represent an important part of nineteenth-century working class history. In my view, the real problem is not the demolition of the crumbling buildings, but the fact the local businesses have been forced to move out of the area to make way for the development. The restaurants and cafés along the condemned street were bustling centres of the community. The little shops, including an ironmonger and shoe repairer, provided services to locals that are almost impossible to find in large chain stores. Some things never change. My PhD research examines the impact of urbanism projects on local populations in Paris during the 1960s. During this time, several areas of eastern Paris were demolished, leading to the closure of small businesses. High rents for the replacement housing drove thousands of inhabitants from the city to the suburbs. Fifty years on, low-income Parisians still fear a one-way ticket out of the city, as the developers wield their axe.