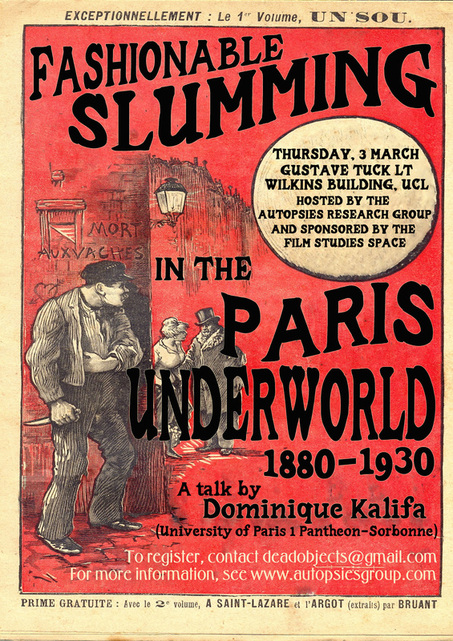 Fashionable Slumming in the Paris Underworld, 1880-1930


Professor Dominique Kalifa’s lecture will take us to the very heart of "The Mysteries of Paris," a complex system of representations of crime, vice and poverty that emerged in the mid-19th century. Kalifa will begin by defining what the French called the bas-fonds--"the lower depths"--considering its differences from the English underworld and slums. He will then focus on one way of exploring that French underworld, the one baptized "The Tour of the Grand Dukes." From the 1890s, this expression was used to describe the night excursions organized for rich Parisians and well-heeled foreigners into the urban areas known as thieves’ dens, slums, and "casual wards" (doss houses). This lecture will seek to understand the construction of this "other Paris," tracing it through novels, press reports, social surveys, and films, but also through the real practices which gave birth to it.

Professor Dominique Kalifa is Director of the Graduate School in History of the University of Paris 1 Panthéon – Sorbonne. His research concerns the history of crime, transgression, social control, and mass culture in 19th- and early 20th-century France. He is the author of seven books, including L’Encre et le sang (1995); Naissance de la police privée (2000); La Culture de masse (2001); Crime et culture au XIXe siècle (2005); Biribi. Les bagnes militaires de l’armée française (2009). His lecture at UCL is drawn from the book he is currently completing about the Underworld and its role in the Western imaginary.

The Autopsies Research Group would like to thank UCL’s Research Challenges, as well as SELCS and UCL French for their support of this event. 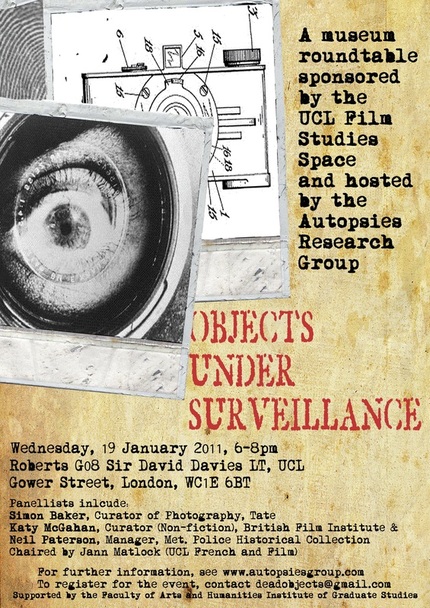 NB: A video of this event is available to watch here.

The Film Studies Space at UCL is sponsoring the first in a series of events engaging representations of surveillance and policing technologies. This Museum Roundtable, entitled Objects under Surveillance, brings together a group of museum professionals to discuss the intersection of modern policing and cultural representations in the museum.

The roundtable will explore themes addressed by the two current projects within the UCL Film Studies Space--Cinematic Memory, Consumer Culture, and Everyday Life, and The Work of Film—and kicks off a series of events relating to “The Cultures of Surveillance.” We are grateful to acknowledge funding from UCL’s Research Challenges Grants and the Faculty of the Arts and Humanities Institute of Graduate Studies. 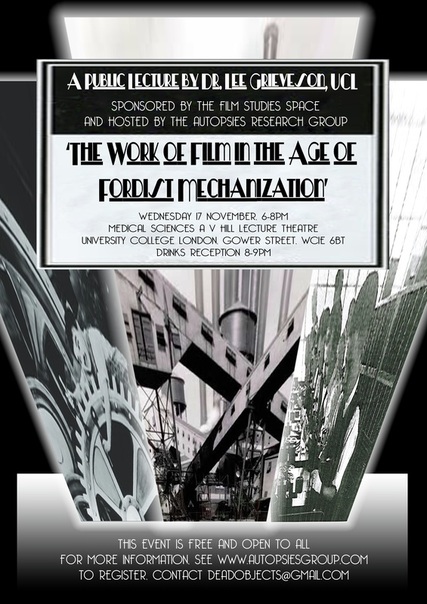 The work of film in the age of Fordist mechanization

This talk describes and analyses the Ford Motor Company’s extensive use of film in the 1910s and 1920s, tracing out the ways this connected to the company’s elaboration of new mass production processes and corresponding strategies of worker control that together were central to the establishment of the political economy of advanced capitalism.

Lee Grieveson is the Director of the Graduate Programme in Film Studies at UCL. He is most recently the co-director of the Colonial Film Project.
Back to forthcoming events