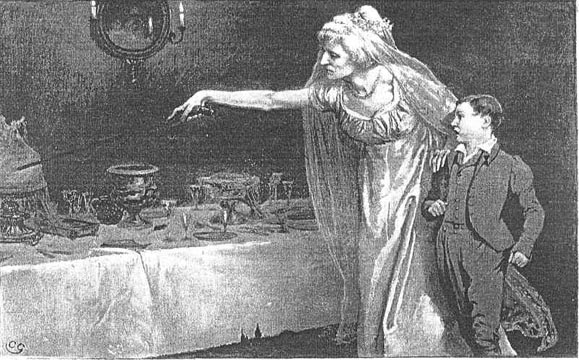 
In the case of Dickens, remarks Steven Connor in his essay 'The Haunting Man', 'reverence consorts closely with a sort of revenance'. Dickens, says Connor, is both a haunted and haunting writer; the words of his tales 'keep coming back', in startling cycles of synchrony. The idea of revering and returning is apt for the curation of the 'A Hankering after Ghosts' exhibition at the British Library, where the ghostly subjects and paranormal ephemera of Dickens' life and work are on display to mark the bicentennial of his birth.

These written and drawn artefacts reveal Dickens's fascination with the supernatural, and with the myths and discourses that surrounded spirits in his era. The imagery of his ghost tales surfaces in spectral illustrations and ghoulish engravings - see early editions of A Christmas Carol, Great Expectations and The Haunted Man. Find the printed matter that influenced Dickens' writing: a penny weekly magazine, The Terrific Register, on murder, ghosts and incest; The Spiritual Magazine, which documented the Spiritualist craze, originating in New York around 1848. Dickens was both inspired by the Spiritualist movement and cynical towards its claims, later writing against such, 'Well authenticated rappings' in Household Words. There are examples of Spirit Photography; of short stories, 'To be Read at Dusk'; and of correspondence on subjects such as mesmerism and 'animal magnetism'.

While Dickens continues to haunt the public and the academic imagination, the yellowing pages of these lesser-turned tomes surely have not seen the light of day for some time. Glass cases amass 'Dead Objects' by the book: old media, writers' letters and hand-classified archives - such as those of 'The Ghost Club' - a group of macabre scribes that later included Arthur Conan-Doyle and W. B. Yeats. Such centuries-old books, hinged open at their frontispieces, belong to other times, so that the visitor is made to realise the materiality of the writer's archive.

The exhibition gives the afterlives of Dickens's tales an afterlife of their own.

Long after the serialized installments of Dickens's day, discover how his fictions appear in digital publishing now, with this summary of Dickensian-themed apps.


Back to The Afterlife of Dickens Objects