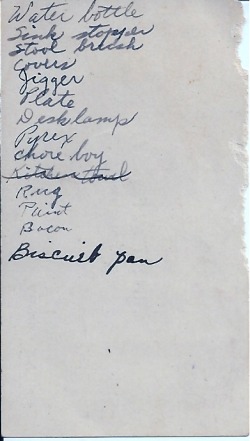 I found this tiny piece of paper (it's about the size that you see on the website) among some important documents that my mother had saved from my father's desk when he died in 1982. My guess is that it dates from 1942 and was the list that he and my mother constituted, in his handwriting, for him to go out and buy for their first apartment together in California near where he was stationed in World War II before shipping out as a naval officer as a ship pharmacist. I love the fact that they needed a jigger (to measure booze for Manhattans?) and a biscuit pan. Are biscuit pans dead objects today? I wouldn't know what one looks like, any more than I'm sure what a "chore boy" or "purex" represented. What would a water bottle have been in 1942? 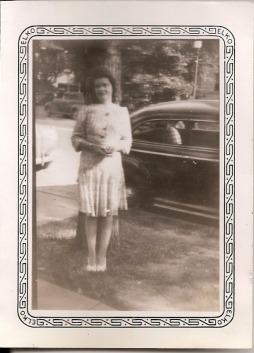 
As the dead prey upon us,
they are the dead in ourselves,
awake, my sleeping ones, I cry out to you,
disentangle the nets of being!

I pushed my car, it had been sitting so long unused.
I thought the tires looked as though they only needed air.
But suddenly the huge underbody was above me, and the rear tires
were masses of rubber and thread variously clinging together

as were the dead souls in the living room, gathered
about my mother, some of them taking care to pass
beneath the beam of the movie projector, some record
playing on the victrola, and all of them
desperate with the tawdriness of their life in hell . . . . 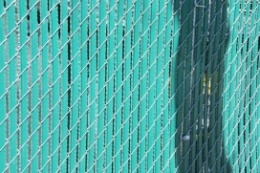 I would like to make poems out of real objects. The lemon to be a lemon that the reader could cut or squeeze or taste--a real lemon like a newspaper in a collage is a real newspaper. I would like the moon in my poems to be a real moon, one which could be suddenly covered with a cloud that has nothing to do with the poem--a moon utterly independent of images. The imagination pictures the real. I would like to point to the real, disclose it, to make a poem that has no sound in it but the pointing of a finger.

We have both tried to be independent of images (you from he start and I only when I grew old enough to tire of trying to make things connect), to make things visible rather than to make pictures of them (phantasia non imaginari). How easy it is in erotic musings or in the truer imagination of a dream to invent a beautiful boy. How difficult to take a boy in a blue bathing suit that I have watched as casually as a tree and to make him visible in a poem as a tree is visible, not as an image or a picture but as something alive--caught forever in the structure of words. Live moons, live lemons, live boys in bathing suits. The poem is a collage of the real.

But things decay, reason argues. Real things become garbage. The piece of lemon you shellac to the canvas begins to develop a mold, the newspaper tells of incredibly ancient events in forgotten slang, the boy becomes a grandfather. Yes, but the garbage of the real still reaches out into the current world making its objects, in turn, visible--lemon calls to lemon, newspaper to newspaper, boy to boy. As things decay they bring their equivalents into being.

Things do not connect; they correspond. That is what makes it possible for a poet to translate real objects, to bring them across language as easily as he can bring them across time. That tree you saw in Spain is a tree I could never have seen in California, that lemon has a different smell and a different taste, BUT the answer is this--every place and every time has a real object to co-respond with your real object--that lemon may become this lemon, or it may even become this piece of seaweed, or this particular color of gray in this ocean. One does not need to imagine that lemon; one needs to discover it.

Even these letters. They co-respond with something (I don’t know what) that you have written (perhaps as unapparently as that lemon corresponds to this piece of seaweed) and, in turn, some future poet will write something which co-responds to them. That is how we dead men write to each other.

(from My Vocabulary Did This to Me: The Collected Poetry of Jack Spicer, ed. Peter Gizzi and Kevin Killiam [Middletown, Conn.: Wesleyan University Press, 2008], pp. 133-34)

In this postwar Austrian-U.S. coproduction, directed by Emile Reinert, a key scene occurs in the Kaiserpanorama of Vienna. The mise en abyme of proto-cinematic technology in the film noir draws our attention to the fact that we are watching a film in the same way the characters are--and to the way optical devices as well as film make possible fantasmatic excursions in space and through the monuments of cities.

This film is available through the Film Archiv Austria in a restored print on DVD. 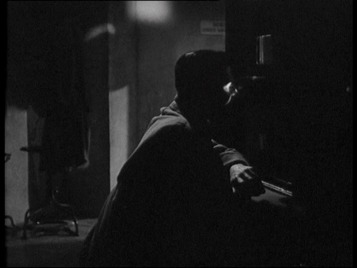 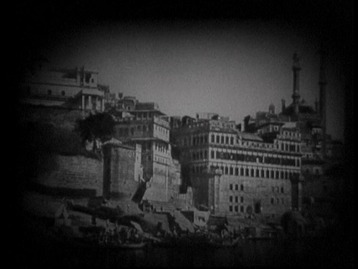 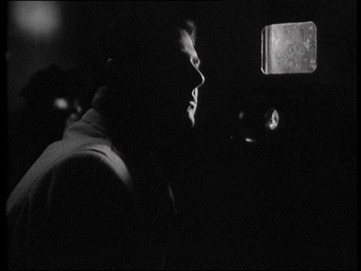 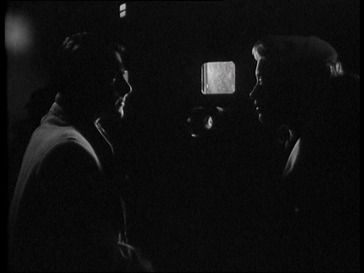