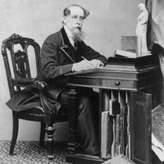 To mark the bicentenary of the birth of Charles Dickens (7 February 1812), events and exhibitions have been organised all around Britain and abroad. As part of the celebration of Dickens and Dickensiana, the Autopsies Research Group announces its investigation into The Afterlife of Dickens Objects. This project places the emphasis on the household items and everyday objects that appear in Dickens's texts and in curated exhibits of Dickens's life.

Victorian novels are crowded with objects, and Elaine Freedgood has demonstrated how the ‘objectness’ of these items might help us to identify the social, political, and economic contexts in which these texts were produced. Freedgood draws attention to fabric samples, mahogany furniture, and a certain type of tobacco to reconstruct these contexts and consider how seemingly ‘inconsequential and uninterpretable’ things offer a lens into otherwise ‘unexplored and unexamined’ aspects of the texts themselves [1].  As Freedgood acknowledges, these items gesture to economies that operate beyond the textual level. Their existence offers evidence of these economies and the material cultures in which the novelists operated. The afterlives of these objects, then, also provide evidence for investigations into the lives of these authors as well as those of the characters they created. With the interest in all things Dickens that has exploded as a result of his bicentenary, the Autopsies Research Group has set out to study the objects used to narrate Dickens’s life and times in both his texts and in curated exhibits all over Britain. The Afterlife of Dickens Objects places the emphasis on household items and everyday objects such as desks, cheques, coal scuttles, and candle holders. Our aim is to provide an analysis of these objects and their ‘objectness’ and introduce them as negotiation points between Dickens, the networks in which he interacted, and the audiences that his novels, and their film adaptations, continue to reach. If you would like to contribute to this project, send a message to Dr Michael McCluskey to express your interest and identify the objects whose afterlife can contribute to our consideration of Dickens and Dickensiana.


[1] Elaine Freedgood, The Ideas in Things: Fugitive Meaning in the Victorian Novel (London; Chicago: University of Chicago Press, 2006), pp. 1-2.
An episode of French television documentary series Le Fond et la Forme from 17 September 1970 marking the centenary of the death of Charles Dickens. There are no subtitles but the film features some interesting footage of London in 1970 and old photography of the city. Further information about the film here.
Back to The Afterlife of Dickens Objects