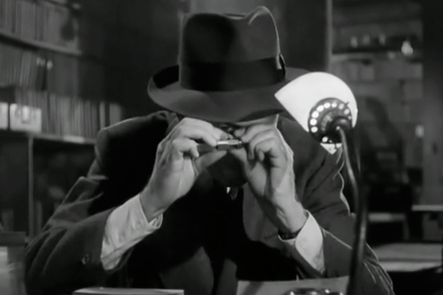 Call Northside 777 (dir. Henry Hathaway, 1948), unfolds around the objects of both dead media and surveillance. 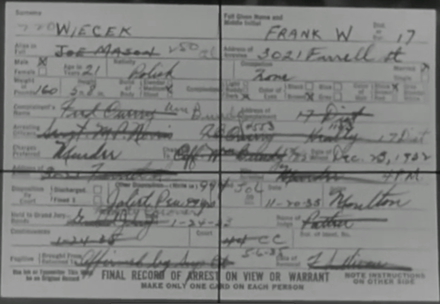 A newspaper reporter turned detective goes about his clue-finding among paper archives and police files, surrounded by typewriters, round dial telephones, fountain pen holders, magnifying glasses. Inscription, the body and surveillance converge in the choppy handwriting of penned information and the traces of the lie-detector machine, which transforms physiological response to written score. 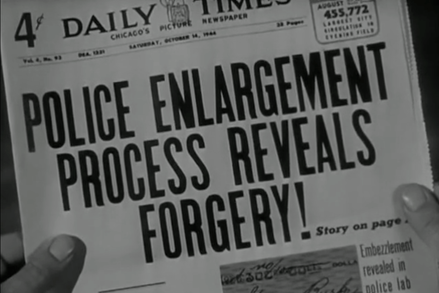 The technologies of print media are brought into focus as we see inside the newspaper's offices, hear the clatter of the printing press, and witness close-ups of headlines: "Newspaper Enlargement Process Reveals Forgery!" It is the enlargement of a photograph, revealing the date on a newspaper, which will provide the final link in the detective's evidence. The powers of reduction of microfilm - a technology used at the time in real scenarios of detection and espionage - also enable the detective to surreptitiously capture a crucial police record. 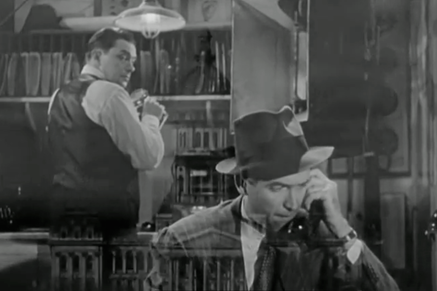 In the development of the film's investigation, the fields of vision, information and knowledge contract and expand. The viewer is made to enquire who is empowered with the ability to see, and therefore to know; to ask which media tools allow further scrutiny of the details. The viewer meanwhile is led in their own pursuit of observation, following the film to its solution according to the new means of seeing it presents.

Back to Autopsies of Surveillance